What is a Sweat Lodge Ceremony

The Sweat Lodge is a place of spiritual refuge and mental and physical healing, a place to get answers and guidance by asking spiritual guides, totem helpers, the Creator and Mother Earth for the needed wisdom and power. 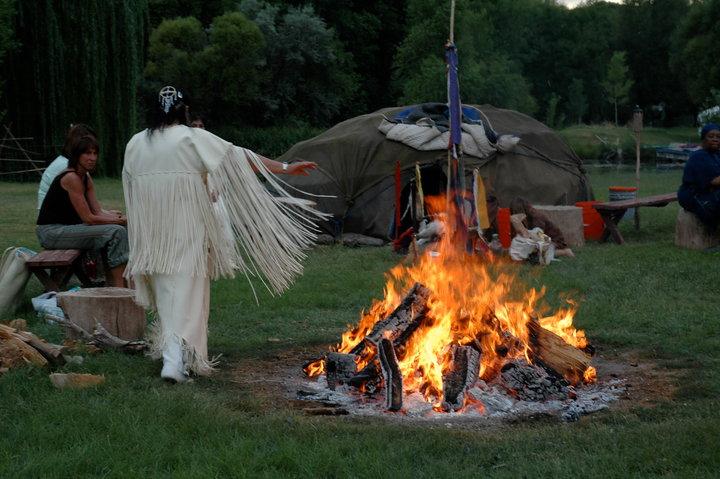 Why was the Sweat Lodge created by Native American People?

It was prompted by the influence of European culture with its corrupting effect on native culture. With the introduction of alcohol and the inhumane treatment of native people, the need to re-purify themselves and find their way back to traditional ways of living became evident, as they were becoming increasingly poisoned by European culture. The Sweat Lodge Ceremony was the answer.

What is a Sweat Lodge made up?

The lodge in former times was covered with the hides of buffalo, bear or moose. In this day, the animal skins have been replaced with blankets, plastic sheeting, old carpet, heavy gauge canvas sheets and tarps to retain the heat and the steam.
There are several styles of structures used in different cultures; these include a domed or oblong hut similar to a wickiup, a permanent structure made of wood or stone, or even a simple hole dug into the ground and covered with planks or tree trunks. Stones are typically heated and then water poured over them to create steam. In ceremonial usage, these ritual actions are accompanied by traditional prayers and songs.

Inside the Sweat Lodge Ceremony…

In many traditions the entrance to the sweat lodge faces to the East and the sacred fire pit. This has very significant spiritual value. Each new day for all begins in the East with the rising of Father Sun, the source of life and power, dawn of wisdom, while the fire heating the rocks is the undying light of the world, eternity, and it is a new spiritual beginning day that we seek in the sweat ceremony.

Common to all traditions, and the sweat, is the ideal of spiritual cleanliness. Many sweats start with the participants fasting for an entire day of contemplation in preparation for the sweat while avoiding caffeine, alcohol and other unhealthy substances. Prior to entering the sweat the participants usually smudge with sage, sweetgrass or cedar smoke as a means toward ritual cleanliness.

When all are inside the sweat leader calls upon the doorkeeper to drop the flap covering the lodge opening. The lodge becomes dark, and at this point the lodge leader announces that all are free to leave the lodge at any time if they cannot endure. (If you must leave, speak out “Mitakuye Oyasin,” “All my relatives.” The other participants will move away from the wall so that you may pass behind them as you leave in a clockwise direction.) He then asks for a short, contemplative silence. After the brief silence the flap is raised, and the leader calls upon the fire tender to bring in the heated stones from the sacred fire.

Aglow with the luminance of the red hot stones, the ceremony begins in the lodge. The sweat leader sounds the Water Drum and calls forth the spirit guides in prayer from the Four Directions. The sweat leader then dips water and pours it onto the hot stones in the pit, producing large amounts of steam, usually one dipper for each of the four directions, or until he is told by the spirits to stop. Then he begins his prayers, songs and chants.

The Sedona Weekend Retreat will take place Aug 30 – Sep 1st.  Join Billie Topa Tate and the Native American Elders in ceremony.  A place where the past, present and future come together.

We must always walk the Red Road in a way that honors others’ views and teachings without sacrificing our own. All of these ways are good, none is better or worse than the other.

All sweat lodges are differnt and it’s very important if you partake in a sweat lodge ceremony that it be lend by an official elder of the Native American people so that you are guided in the right ways of the ceremony.